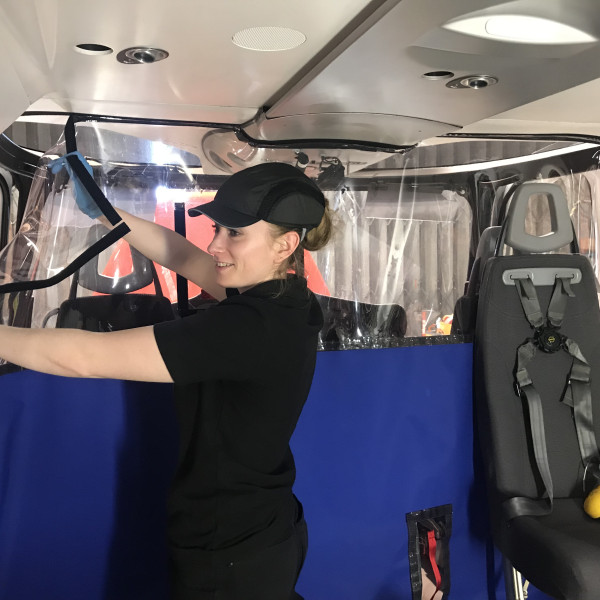 CHC teams worked at pace to come up with a creative solution designed to keep crews and passengers alike safe at the outset of the COVID -19 pandemic.

An aircraft modification process that would in normal circumstances take several months to complete was done and dusted in less than two weeks – and elicited highly positive feedback from customers.

It was all focused on developing an improvised screen for installation between the cockpit and cabin areas of its UK-based helicopters, to deliver a robust social distancing arrangement and thereby protect everyone on board.

The engineering and continuing airworthiness teams in Aberdeen worked closely together on a safeguarding measure for both aircrafts crews and offshore oil and gas personnel who are inevitably in close proximity during flights.

Engineers and colleagues in the trim shop co-operated to design and make a heavy-duty PVC barrier – made from materials sourced locally – that could be temporarily affixed to the ceiling, cabin walls and floor to physically divide the two areas.

At the same time, continuing airworthiness colleagues were engaging with the regulatory authorities to have the concept swiftly approved for deployment.

“It would usually take a number of months to take an idea like this from initial concept to manufacture, but in this case we were already starting to install them within 14 days,” says UK Maintenance Manager Dan Green.

Adds Continuing Airworthiness Manager David Barron: “We were quickly able to show the regulators this was a robust modification, designed to high standards. They were amenable to the initiative and happy to have us fast-track the process.”

The screens were installed on CHC’s UK assets, across all aircraft types, while other CHC regions also followed similar principles to introduce similar solutions to their operations.

Part of the UK-designed barrier is transparent, to retain an element of visibility between cockpit and cabin, while a small openable section enables communication between the two areas if required.

“It’s a great example of everyone getting together to create a solution that’s worked really well,” adds Dan. “It was all about protecting two groups of people who have to go to work, and have to be together in a relatively confined area.”

The barriers remain in place meantime on all aircraft, and David adds: “The feedback from customers was very positive. We’d been able to react quickly, and we kept them informed through a process that has provided an extra layer of safety and assurance for their workforce as well as our crews.”

*Dan also pays tribute to the resilience shown generally by engineering teams at CHC’s UK bases throughout the pandemic, and to facilities colleagues for very quickly creating workplace barriers to protect teams operating in a very testing environment when it came to social distancing.