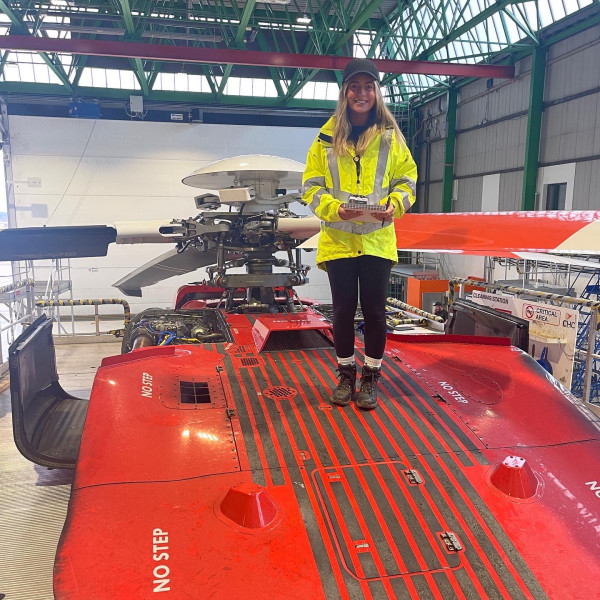 Emily Marr has completed a year-long placement with our safety & quality team in Aberdeen, Scotland, during her international business management studies at the city’s Robert Gordon University.

She’ll soon be back, however – she’ll be working part-time with the team during her final year at university then joining CHC on a full-time basis next year.

And she’s also benefiting from a series of professional development opportunities, including attendance at the CHC Safety & Quality Summit in Texas in October.

Emily spent the latter part of her placement working not in the Aberdeen office, but with safety & quality colleagues in CHC’s north hangar facility at Aberdeen Airport.

“It was really valuable to see the operational side of things and learn as I went along,” she says. “It gives you lots of new confidence as well – I went from being initially reluctant even to ask questions in meetings to, on occasions, running the daily safety risk meetings.

“Aviation can be an overwhelming industry to enter, and I think it’s up to individuals to make the most of the sort of opportunity I’ve had. What you get out of it depends on what you’re prepared to put in.”

During her placement year Emily attended various seminars, courses and training – including her Helicopter Underwater Survival Training. She’s also looking to develop her learning once she returns full-time by undertaking a Masters In Aviation Safety with CHC’s support.

And she’s been sponsored by EMEA Regional Director Mark Abbey to attend the Safety & Quality Summit in Dallas – another welcome opportunity to broaden her professional horizons.

“To me, the way a company invests in and encourages its entry-level positions such as interns speaks volumes,” adds Emily. “CHC has in my view demonstrated its dedication to staff development.”

Caitlin Muirhead has similarly undertaken a year’s placement in Aberdeen during her management with marketing studies at Robert Gordon University.

And, as is often the case with such experiences, it has informed her thinking on what she does – and doesn’t – want to do with her career.

Caitlin began her spell with CHC as an HR and legal intern but spent the last couple of months working alongside Global Communications Director Sue Fay.

“It was a move that gave me even more from my placement because it helped me realise that marketing and communications is probably where I’d like to develop my career,” she says.

“It very much reflected what I’ve been focusing on at university so it’s been really good to put that theory into practice,” she adds.  “I also built up lots of contacts in the communications and marketing sector, which could be really useful in the future.”

Like Emily, she believes that the skills and experience any young person picks up from internships with businesses like CHC are invaluable – regardless of where their career eventually takes them – because they’re usually readily transferable and hugely valuable to future studies.

“I’d recommend to anyone to take up any placement opportunities that arise because they’re giving you that opportunity to see how your studies relate to the workplace and helping you decide where your professional future might lie,” adds Caitlin.

Toby Fruin has also reached an early career milestone by completing his aircraft maintenance apprenticeship with CHC – and it’s a route into the industry that he 100% recommends.

Toby, based at Norwich in the UK, studied aircraft maintenance engineering at college for two years before completing key modules with specialist aviation training business Resource Group then joining CHC on a full-time basis to gain his practical knowledge and experience.

Completion of his apprenticeship now gives Toby the platform to progress towards his Category A aircraft engineer licence.

Meanwhile, he’s been delighted to accept a post-apprenticeship position with CHC and is gearing up to support operations at one of its UK bases.

“It’s been great to reach this stage and have the opportunity to press on,” says Toby. “It can be difficult to find the best route into the industry – in my case, the apprenticeship programme with CHC was pointed out to me by someone already working as an engineer, and it was then about applying and hoping for a place.

“For anyone who wants to become a licensed aircraft engineer, I would 100% recommend trying to secure an apprenticeship. Maintenance was the path I wanted to go down and this is the best route into it.

“One of the most important parts is gaining your modules, which is less straightforward if you decide to take the university study route. And there’s also the practical side of it – an apprenticeship is such a good way of getting front-line experience and developing your skills because you’re learning in a real-life environment.

“It’s been really positive and I’ve learned so much – there are things I can do now that I couldn’t even have looked at a year ago. You have to take the initiative and make the most of the chance you’ve been given.”