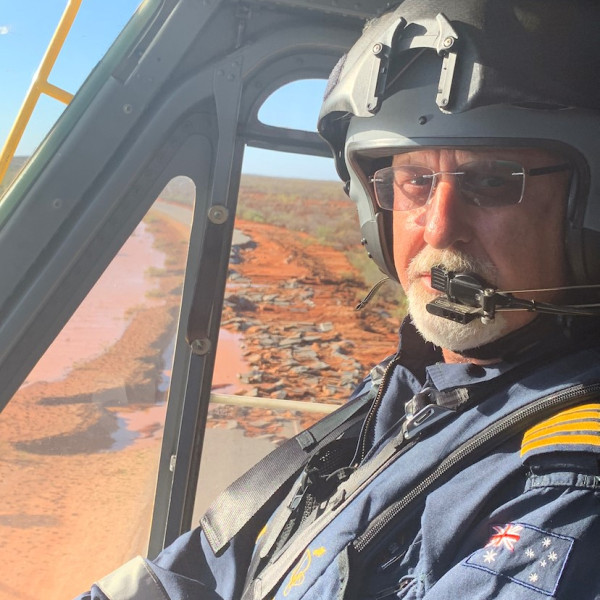 Mick is base manager at our emergency rescue operations at Jandakot Airport in Perth, Western Australia.

… on why he’s proud to work for the business

Mick was playing a key role in a major new offshore contract 16 years ago when his wife discovered she was pregnant – with triplets.

He had been earmarked to take on an onshore post in due course, but when he met with managers to see if they might accommodate his change of circumstances and redeploy him onshore more quickly so he could be readily available to support his wife through challenging times, he anticipated he might get a negative response.

“In fact I got the exact opposite,” says Mick. “The first question to me was: ‘what can we do to help you and your family?’.

“That’s where much of my pride comes from. I think back to that one moment and how the company got behind us and supported us my family all the way through. I always try to give back as much as they gave to us then.

“So much work-related stress was lifted for a while and I was able to support my wife fully during and after the safe and healthy arrival of our triplets.”

… on why he loves the work

“I was brought up to believe you should try to give back to your community,” he says. “I was involved in lifesaving and as an ambulance officer when I was younger, and always wanted to be a rescue helicopter pilot – it’s why I became a pilot in the first place.

“It’s such a rewarding job to do. I’ve been involved on the rescue side for 16 years and will happily spend the rest of my working life doing this.

“We’ve been providing emergency rescue helicopter operations in Western Australia for nearly 20 years and have just been awarded another 12-year contract. It shows that the client recognises the dedication of our people – they know they’ll get 110% commitment, every day.”

…. on how mission resilience means always finding a way to help

Mick and colleague Fraser Booth improvised a sea rescue effort to save the life of a young man.

They were on their way to carry out a medical evacuation when they spotted the person in difficulty off a beach. Without a rescue swimmer immediately available, they instead lowered a lifting hoist into the water, signalled to the person to take hold of it and slowly pulled him to safety in shallow waters.

“We weren’t geared up for a rescue of that type but we weren’t going to look on and do nothing,” says Mick. “We made use of the resources immediately available to us to respond in the most effective and safest way possible.”

Those same principles were also applied last year when Mick and colleague Garth Fitzgerald were dispatched north at short notice to help out after a major flooding event at Carnarvon.

They worked closely with other agencies to quickly fashion a practical response to save lives.

“Once we got there, we flew flat out as we pulled people out of flood areas,” he adds. “We then flew missions to resupply people with essentials such as water and food, and to carry out some medical evacuations.

“It was all about coming up with the best solutions to safely help as many people as possible, in a remote area that’s not used to working with a rescue helicopter.”

… on the spirit of camaraderie that defines rescue operations

“We have a real ‘second family’ atmosphere at Jandakot and we really value it,” says Mick. “In our line of work we sometimes see very difficult things and people naturally get emotive about those. We know how important it is that we support one another and check in on colleagues.

“You never know what you’ll be doing each day. It can be a great day or a really bad one, but you always know you’re surrounded by friends who are there to help and support.”