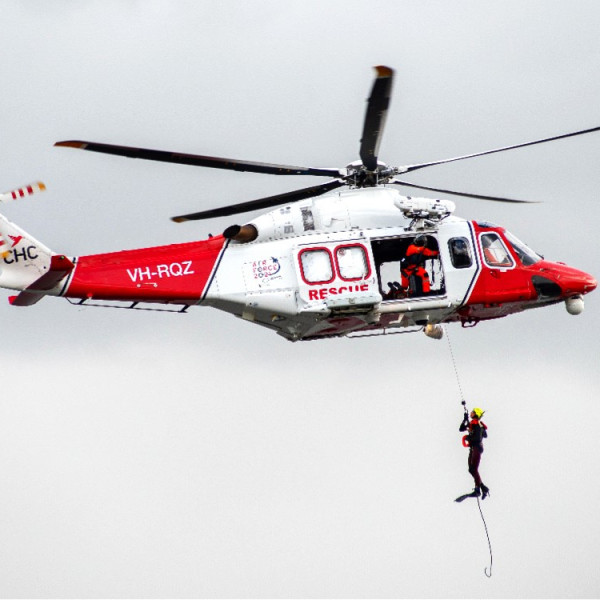 Bec has been with CHC for just over five years, having previously worked as a lifeguard and in a voluntary role with the fire and rescue service that she continues to fulfil today.

“Many people in our profession come from a lifeguard or emergency services background,” she says. “As in my previous roles, job satisfaction comes from that feeling that you’re making a difference in the world on that day.

“You’re there to help people on what might be the worst day of their life, and you’ve been able to do just that.”

Bec has worked on various contracts during her time with CHC, and her mission experiences include one job when she was dropped into the sea to help rescue two people on a stricken vessel.

The boat was too small to enable the SAR crew to winch directly to it, so Bec swam through the waves to get the two men into the water and away from the boat so they could be winched to safety directly from the sea.

“It wasn’t an everyday task but it’s the sort of situation you have to be ready to deal with,” she says.

Bec believes there’s a great structure in place at CHC for people to join SAR or EMS operations and develop their career. “It’s set up to take civilians with no aviation background on board and grow their rescue crewman skills, then to keep building their knowledge and capabilities.”

Bec’s long-term ambition is to join CHC’s operations that support the Department of Fire and Emergency Services in Australia – therefore aligning her professional and voluntary roles.

‘Real appreciation… of the impact and contribution we can make’

Lyndal joined just over a year ago in a career move that combined her previous role in emergency services and pre-hospital care in the mining industry with her personal interest in aviation.

“I’m always looking to learn as much as I can from colleagues at our base,” she says. “I feel grateful and privileged to be in a role where I can bring two of my interests together, and hope one day to reach the position of air crewman working on an EMS contract.”

CHC’s resources at Pearce – and indeed other bases – can sometimes be called upon by other authorities to take part in multi-agency jobs, and a recent task to help search for a missing fisherman gave Lyndal one of her first tastes of the front-line work.

“It gave me a real appreciation of the skills that rescue crewmen need to develop over time, and of the impact and contribution we can make,” she adds.

The fact that the personal development dimension of the role involves both mental and physical challenges is a big motivator for Lyndal. And she takes inspiration from the professional journey that many of her colleagues of today have already made.

“The crews are made up of a great bunch of people, very down-to-earth and from all walks of life,” says Lyndal. “Hearing of their task experiences and learning from their knowledge and skills has been really invaluable to me.

“I hope to have the opportunity to work in the aero-medical space in due course, which would be really rewarding for me, but I know I need to put in the hard yards meantime and prove myself.”