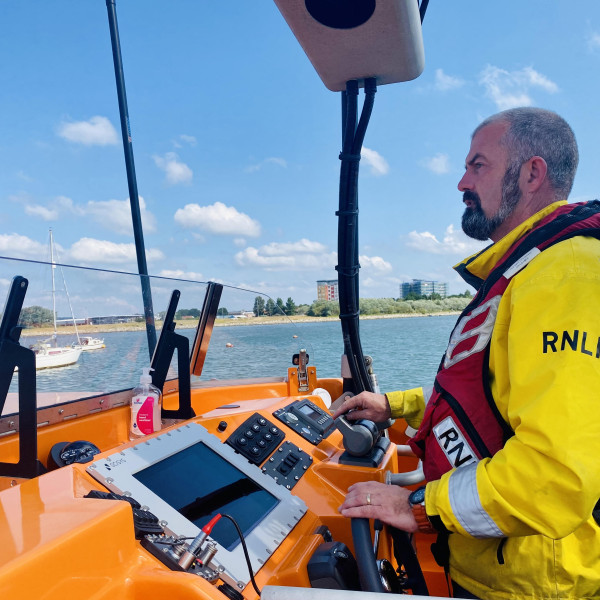 In his time away from work, however, he is regularly on call with the RNLI (Royal National Lifeboat Institution) as the deputy coxswain with the local lifeboat crew at his home village of Dunmore East.

And there are often occasions when his two roles come together, either when he’s on lifeboat duty and his CHC colleagues are involved in the same rescue mission or vice versa.

“The real benefit for me is in the overlapping knowledge I’ve developed,” says Neville. “When I’m at work and out on a task I can sometimes tap into the maritime experience I’ve built up from my RNLI role, and equally I’m very much aware of how helicopter operations are contributing when I’m on a lifeboat shout.”

Neville’s been an RNLI volunteer for around 17 years and was first inspired to join when he saw the valiant efforts of lifeboat crews during his early years as a winchman.

“I developed such a huge respect for these volunteers – and they are volunteers, going out in the most extreme conditions for no reward other than helping others. I took the opportunity to join after I moved to a house close to the station at Dunmore East,” he adds.

One of Neville’s most high profile lifeboat shouts in recent years involved a co-ordinated rescue operation to prevent the cargo ship Lily B crashing into rocks on the Irish coast after losing power. Three lifeboats worked together in heavy seas to fix tows to the stricken vessel and keep it away from the rocks until a tug arrived on scene to complete the rescue. The operation also involved the Rescue 117 Coast Guard helicopter from Waterford on which Neville serves.

Bringing through a new generation

Neville has been a trainer for several years, while his remit also now extends into training standards. The training dimension to his role is one that he finds particularly rewarding.

“I’m loving the opportunity at the moment to bring people through who have often never seen the inside of a helicopter before – to teach them everything I’ve learned myself over the years and equip them to become the winchmen of the future,” he says.

One of his specific areas of recent focus, meanwhile, has been a country-wide training programme in night vision imaging systems that have been introduced to CHC’s Ireland operations.

“The technology doesn’t enable us to do anything we couldn’t do before, but it does significantly enhance the safety of what we are doing,” adds Neville. “It’s a big step forward – quite literally night and day compared to before.”

Neville, who’s been with CHC for 21 years, says the formula for safe and effective search and rescue operations can be distilled down to one word: trust.

“The work does regularly test you: you’re 200 miles offshore, in extreme weather and high sea states, and you’re trying to put someone on a wire onto a ship’s deck that’s rolling in all directions.

“Trust among the four of you – the pilot, co-pilot and two tech crew members – is everything in those circumstances, and that stems from both continuous training and the bond you develop as a team.

“It’s the same when you’re together at the base. There are six of us on shift – two pilots, two tech crew and two engineers – and it’s important that everyone works well together in an environment which can instantly switch from routine training to a high intensity situation.”

One of the big community support projects for the Waterford base is its annual participation in a festive season event for children with special educational needs at local schools.

All the emergency services in the county get together to support an event hosted by a local hotel: the youngsters are given a ‘blue lights’ convoy to the hotel for a party, where Santa drops in by helicopter to present gifts.

All those involved donate their time and resources for free, and Neville says: “It’s a really special day and everyone is delighted to take part. We all recognise how important it is to help out in ways that really make a difference locally.”