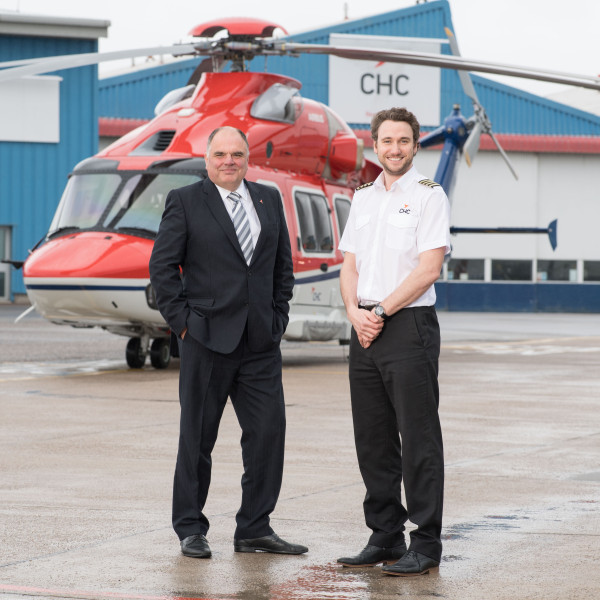 That’s where the reward lies for Ryan and rest of the organising team – as well as the hundreds of enthusiasts who take part in the midnight run.

It all stems from a 2017 chat between Ryan and a visiting friend – a British Airways pilot – who was returning to London to take part in a similar run at Heathrow.

“It stimulated my interest as I hadn’t heard of the idea before,” says Ryan. “I asked around to get the thoughts of others and spoke to the original organiser of the Heathrow run to find out about issues around planning and security.

“I engaged with the airport and also spoke early to our regional director Mark Abbey. He was immediately interested in its potential as a platform for charity support and was keen to let me run with it.

“It shows that CHC is always happy to explore ways to promote a sense of community engagement and help others.”

The 3.5km run has developed thanks to a close collaboration between CHC and the airport, with a team of people taking on the complexities involved in making it happen. It resurrects an initiative the airport first hosted around 2013, when cast members from the TV soap Emmerdale took part.

Ryan points out that the run at Heathrow, which has two runways at its disposal, is probably simpler to stage: it could be argued that Aberdeen, with a single runway and host to SAR and air ambulance services which potentially require 24/7 access, presents greater logistical challenges.

The Aberdeen run was held in 2018 and 2019 then fell into abeyance for two years because of the pandemic. The 2022 event on September 3rd will again feature 300 runners, raising cash for three charities: We Too!, Kayleigh’s Wee Stars and Friends of ANCHOR. You can read more about it here.

Ryan himself is again among those taking to the tarmac. “It’s a fantastic occasion but such a surreal atmosphere,” he adds. “The run starts just off the runway but then you turn onto it and see the long rows of lights, and there’s nothing but silence except the footsteps of the others around you.

“Many of us will have sat on an aircraft at Aberdeen and seen how quickly it eats up the runway as it takes off. It takes significantly longer when you’re running along it!”

He’s hoping that the 2022 event will bring the overall total raised since 2018 into six figures. “That would be an incredible figure to reach – we would never have foreseen it happening,” he says.